THE stand taken in defence of the NoEgo coffee shop at Ormeau between Brisbane and the Gold Coast in Queensland has gone global.

Infowars.com host Owen Shroyer has put up the video of the event, taking special pride in the fact that one of the freedom fighters standing there was wearing a Tyranny Response Team t-shirt sold at the Infowars merchandise outlet.

“There it is! The Tyranny Response Team t-shirt – an Infowars store original,” the Texan crowed. “It’s all sold out. Right there at the front of the pack! Yes! Yes! We are the tyranny response team! You are the tyranny response team. Let me explain it because this image is iconic.” Shroyer then invited the unknown person wearing the t-shirt to come on Infowars as his special guest.

The video was made following two visits to the coffee shop by uniformed police, who claimed the owner Dan Salter was breaking the law by not following the chief health officer’s order that such premises only be used by the vaccinated. “It’s not a law,” Salter told the senior officer on the second visit. A chorus of customers watching and recording the conversation joined in saying “it’s not a law”.

The officer said he would not be issuing a fine, but would report the matter to Queensland Health. The response seemed to be a handball reaction to put the matter back where it truly belongs – with health authorities.

According to the standard state health legislation, so-called health orders should be given in writing by an identified officer to a particular person or entity.

Regardless, Brisbane and Gold Coast people, led by The People’s Revolution group, decided to take the matter into their own hands and blockade any further visit by police and/or health authorities. Hundreds rolled up the next day and police merely did a drive-by. It’s not known whether any health officers tried to visit. 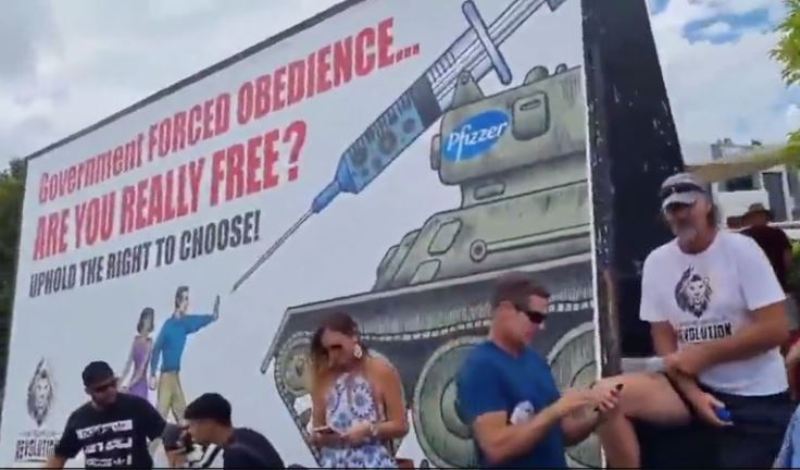