Ukrainian forces have tried hitting the Russian-held city of Kherson on Monday, as it staged its first large-scale World War II Victory Day celebrations since 2014, according to Vladimir Saldo, who heads the regional military-civilian administration.

Several missiles from a Uragan multiple rocket launcher system were fired from the direction of the city of Nikolaev, Saldo told Russia’s Tass news agency.

“They were all shot down by the Russian military’s air defenses… Kherson was the target,” the official insisted.

The administration later said on Telegram that five missiles were fired at the city. The Ukrainian military has yet to comment on the incident.

On Monday, a large crowd took part in the ‘Immortal Regiment’ procession, which is traditionally held in Russia and some other countries on Victory Day to commemorate those who fought against the Nazis.

According to Saldo, Victory Day celebrations included “the maximum possible attributes in the current circumstances” such as a concert, the laying of flowers and a field kitchen, which handed out free military-style meals to the participants.

Kherson, a strategically important port city in the southern coastal part of Ukraine, was the first major city to fall under Russian control after the start of the military operation in February.

Russia attacked Ukraine following Kiev’s failure to implement the terms of the Minsk agreements, signed in 2014, and Moscow’s eventual recognition of the Donbass republics of Donetsk and Lugansk. The German and French brokered Minsk Protocol was designed to give the breakaway regions special status within the Ukrainian state.

The Kremlin has since demanded that Ukraine officially declare itself a neutral country that will never join NATO. Kiev insists the Russian offensive was completely unprovoked and has denied claims it was planning to retake the two republics by force. 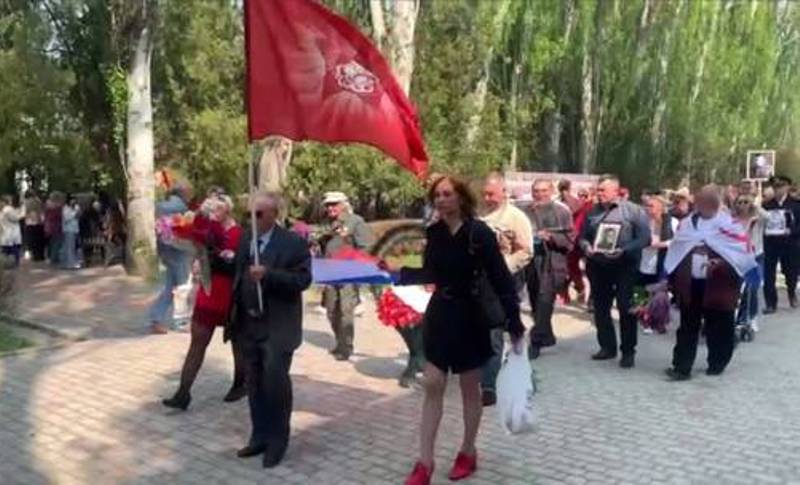