The launch of enhanced 5G services Wednesday had a limited impact on U.S. flights after aviation regulators gave airlines additional guidance to reflect the decision not to launch the new cellular service near major airports.

Airlines had said they were concerned about potential travel disruptions once wireless providers began beaming new signals to customers, due to flight restrictions intended to protect aircraft from possible interference from the new fifth-generation service. Wireless operators have said the service won’t disrupt airplanes’ instruments.

David Seymour, American Airlines Group Inc.’s chief operating officer, told employees in a memo Wednesday that the airline had experienced some minor complications as it waited for the Federal Aviation Administration to revise its operating requirements to align with the new 5G deployment plan. The airline said it had some delays and four canceled mainline flights, along with a few more cancellations and delays among its regional carriers.

Mr. Seymour said that the carrier expects to receive safety clearances for the remainder of its fleet soon.

United Airlines Holdings Inc. said in a statement that the compromise with AT&T and Verizon helped “avoid mass cancellations across the aviation industry.”

The FAA said Wednesday that it had issued new approvals allowing additional aircraft types to land at more airports in low visibility conditions. The FAA said an estimated 62% of the U.S. commercial fleet would be allowed to make low-visibility landings at airports where 5G C-band has been deployed, including Boeing 777 jets, which had previously been left out.

Airlines for America, a trade group, said the agreements allowed thousands of flights that could have been affected to proceed.

Airlines have said that passenger and cargo flights could face widespread disruptions in poor weather, when landing aircraft rely more on automated systems that could be affected by the enhanced 5G services. While airline and aviation safety officials have said the wireless carriers’ decision likely averts the worst potential disruptions, they still anticipate some problems, particularly in bad weather conditions. Delta Air Lines Inc. said Tuesday that it was preparing for possible cancellations.

Around 300 flights within and to and from the U.S. had been canceled by late Wednesday, according to data tracker FlightAware, in line with recent days. These included a handful of flights involving Boeing Co. 777 jets, such as British Airways’ service into Chicago O’Hare International Airport from London Heathrow.

Airlines had been waiting for regulators to approve the 777 to land in poor visibility, mirroring the green light given over the weekend to some other Boeing and Airbus SE jets. Early Wednesday, Japan Airlines Co. and All Nippon Airways, two of the carriers that had canceled some U.S. flights, said they could resume on Jan. 20, citing new FAA guidance indicating that there is no longer concern about flying the 777 to the U.S. Dubai-based Emirates Airline restored some service to three of the nine U.S. cities it had planned to suspend.

Deutsche Lufthansa AG , which canceled one flight and had swapped 747-8 jets for another model on flights from Frankfurt to Los Angeles, Chicago and San Francisco on Wednesday, said its flights would operate normally from Jan. 20. 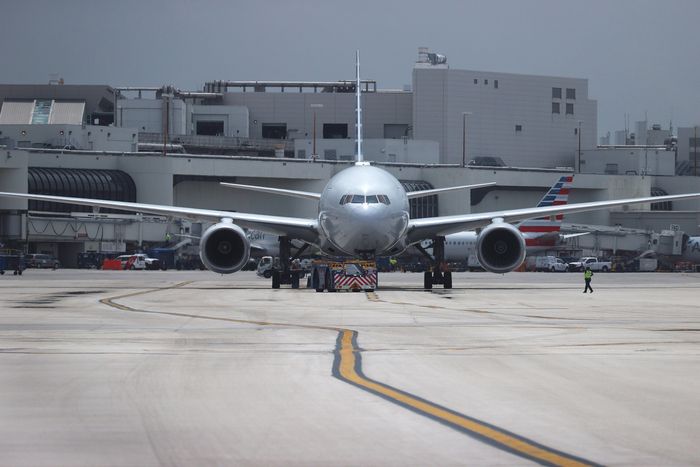 Airlines had said they were concerned about potential travel disruptions once wireless providers began beaming new 5G signals to customers.

The updates came too late to completely avoid upending airline schedules. Boeing had told airlines earlier this week not to operate 777 or 747-8 jets to many U.S. airports due to concerns about 5G deployment, and several international airlines began to cancel U.S. flights or swap aircraft.

Some international cargo flights were diverted overnight to U.S. airports without 5G-related restrictions as airlines awaited new guidance, according to Flightradar24, a flight tracking site. United told customers that some delays and cancellations were caused by “potential interference caused by the implementation of a new 5G signal” and advised them to contact the Federal Communications Commission.

FAA officials’ concerns have focused on a set of wireless frequencies that AT&T and Verizon are using to enhance their customers’ internet connections on the go. U.S. cellphone carriers have offered fifth-generation service for several months but were counting on the new airwaves to boost their services’ speed and capacity this winter.

At the center of the dispute is the FAA’s concern that new 5G signals might confuse radar altimeters, which aircraft depend on to measure a plane’s distance from the ground. The devices feed data into key cockpit systems that help planes land automatically in bad weather, prevent crashes and avoid midair collisions. In recent days, aviation safety officials became more concerned about other systems that rely on data from the radar altimeters.

The FAA said Wednesday it had cleared three additional types of altimeters. It also said the new buffer zones around major airport runways, which wireless carriers agreed to on Tuesday, opened up additional airports.

A trade group representing regional airlines said their operations could still face challenges because the FAA hasn’t approved mitigations for the smaller jets those carriers fly on behalf of major airlines.

“It’s only but for fair weather that it hasn’t been total chaos today,” said Faye Malarkey Black, president of the Regional Airline Association. The FAA has said it is reviewing testing data for altimeters used in regional jets.