How Many Children Will Die Before the Government Admits They “Made a Mistake”?

Steve Leary’s post on Facebook regarding his son, Lachlan, 7 years old, who died after a heart attack shortly after being jabbed:

Hi everyone, Im not sure how long my post will last as I’ve had it removed 4 times already, the disgusting inhumane fb fact checkers and our corrupt government will not allow my comment to stay up. Everyone, I lost my son lachlan last Wednesday to the vaccine. He was 7 yrs old. He had been unwell on Wednesday night with a fever and we monitored him closely, 6am the next morning he started having breathing difficulties so we took him to westmead hospital. They tried to stop us from going in with him but it did not work as I threatened to contact Rebel news and have a reporter here within minutes and they backed off, we were allowed in. 4 hours passed after many tests. He was sent home 5 hours later.
Friday morning at 4am we heard him yell out, he was on his bedroom floor, he then collapsed, he was not breathing, my wife and i began cpr, I called the ambo on loud speaker. Ambo arrived within 7 mins, my son passed away in the ambulance. He had a massive heart attack.
My wife is now hospitalised in westmead hospital heavily sedated. I am trying to hold everything together for our 2 Yr old daughter Sammy. The government has ruined my family, they have taken away our only son, we put our trust in the government to keep us safe and they killed my boy!!!! I have been banned from twitter, posts deleted on my fb page and warnings issued on community standards. So the death of my beautiful boy is being censored!!! I have taken the time this afternoon to email the PM and have demanded an immediate explanation!! My message to parents now is do not allow these people to touch your kids!! I have been abused for allowing my son to be vaccinated but as parents we thought we were keeping him safe. We have to live with this for the rest of our lives. Please please don’t let your babies be subjected to this. I can’t bring my boy back and my family is now broken while our PM lives the high life of luxury probably unvaxxed and his kids as well.
Australia it’s time to wake up now, do not make the mistake I did.
Rip my beautiful Lachlan, mummy and daddy are so sorry. 💕💕🙏🙏

How many children will die before the government admits they “made a mistake”?
Is there a limit on tragedy before we are told they screwed it up?
Please be compassionate towards those parents who trusted government and lost their children.
We need this to shake people up. PROTECT THE CHILDREN!!!
So many stories of children under 10 having heart attacks! 😔💔 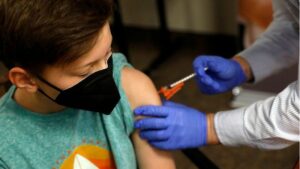 Cyclone2390
Morrison will be OK with at least a million kids deaths. He is a demented dickhead, so morals and decency have no place with that dickhead.

TheCrowhouse
The thing is, they didn’t make a mistake, this has all been completely intentional. Until you realize that, you will never see whats happening

Some of the Payments to Media Companies To Cover Up Vaxxine Death and Injury, Must Have Bounced, and Thus Some Newspapers Occasionally, Highlight the Truth About These So Called “Safe, Effective and Necessary Vaxxines”

Nellie Korda, the Number 2 Female Golf Player in the World Has Been Forced To Stop Competing Due to Blood Clots at the Age of 23